The pretend guns of realism and the reality of resistance

I have written some reflections on the election in Brazil and the art of capoeira. Brazil has a violent and racist history; it also has some remarkable resistance. The piece is called "The pretend guns of realism and the reality of resistance." The struggle is not over! 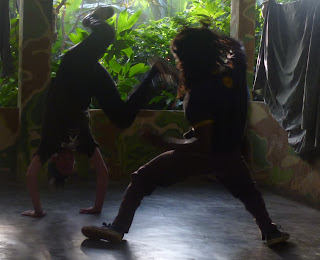 online modules in VCD and Critical and Human Security Studies

For the last couple of years we have been running an online module in Violence, Conflict and Development as part of the CISD's MA in Global Diplomacy. It's been popular and a fantastic experience to be able to include online students in our intellectual community.
We have now completed another course that will run from April 2019 through CISD and in collaboration with CeDEP, SOAS's other distance learning department.
We are working towards being able to offer a full online Masters degree in the near future.

Here are the outlines of our existing modules:

This module provides a grounding in analytical approaches to the political economy of violence, conflict and development by discussing empirical trends, difficulties of data collection and the importance of categorization and boundaries to matters of violence. Foundational theories on conflict and violence including gender perspectives, debates about the origins of human violence (anthropological, historical, psychological sources of violence) and the role of violence in historical change will considered. Against this background, the course explores how development theory has treated violence and conflict at different times before focusing on competing contemporary theories and claims about the causes and dynamics of conflict.The course ends on the links between war/violence, and knowledge production, discourses and ethics, with a focus on terrorism and the war on terror and the ethical challenges of conducting research on violence.

The Human and Critical Security Studies module examines the meanings, mechanisms and agents of security, acknowledging shifts from the traditional notion of national security to forms of Human Security and critiques of the state. The module investigates processes and phenomena that pose direct threats to groups of people and, in doing so, potentially destabilise or aggravate situations. Famine, the oil trade and AIDS undermine people physically, politically and psychologically, and on occasions result in further forms of insecurity as people resist, retaliate or take advantage of volatile situations. The module will examine social factors such as age, gender, class and identity and the way that these shape and are shaped by experiences of security and look at the rapidly expanding academic literature linking specific threats to processes of vulnerability, insecurity, terror and globalisation. The UN, itself heavily involved in forging the meanings of security, has produced documents relating to health, climate change and other elements covered in the course.