Kristallnacht Anniversary and Justice for Migrants

Last week was the 77th anniversary of the Kristallnacht 'Night of Broken Glass' pogroms that saw attacks on Jewish homes, shops and synagogues and the deaths of 100 Jewish people in Germany, 1938. Never Again Ever campaigns to engage actively with the process of memorialisation, and last week held an event at SOAS for the Kristallnacht Anniversary and Justice for Migrants. Speakers were asked to talk about the violence taking place in Europe now in the light of the Nazi Holocaust.

Reflecting on the Nazi Holocaust and the Rwandan genocide of 1994, I presented some ideas about the relationship between violence and development, the political, social and legal processes that make violence apparently necessary or inevitable, and some ways to think about and organise resistance. 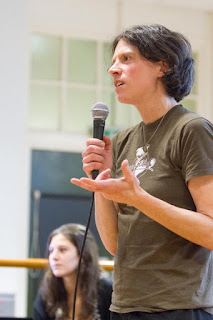 We also gave a capoeira performance. Capoeira is an art form that developed amongst slave and ex-slave communities in Brazil. Through its music and movement it re-iterates a subaltern history. Capoeira generates a space for creativity and community and provides channel for the continuity of the art form.


The audience was invited to write their thoughts on paper darts, and here was one of the reflections.