We are back to our guest blogs! Queralt Ayuso Casajuana asks the question, What Revolution?

“In Iraq, A Kurdish Warrior-Diva Sings Against ISIS, Despite Threats”. That was the headline of the American National Public Radio upon 'Revolution''s release in 2015, the single by the Iraqi Kurdish pop star Helan Abdulla, or Helly Luv.

‘Revolution’ was recorded 3km away from the frontline between the Iraqi Peshmerga and Daesh. It begins in “a village somewhere in Kurdistan” where peaceful life is interrupted after Daesh throws a bomb. In the opposite direction of run-away citizens, walks Helly Luv in shiny golden high heels, and before the astonished civilians, she raises a banner with the words “Stop the violence” in front of a Daesh’s tank, reminding of Tiananmen’s iconic image.

This music video is one of those that you need to watch at least three times in order not to miss anything. And the more you watch it, the more you start to feel its contradictions. Still, the ﬁrst impression one gets is that when women take up arms, they become amazingly powerful. There is a strong message of women as active agents in war, sweeping away the image of women as victims. Women ﬁghting for equality and for their nation, doing what is usually associated with a male gender role. It is hard not to get seduced. However, after these three or four times, you can leave aside the euphoria of women warriors ﬁghting Daesh and examine Helly Luv’s message more carefully.

A ﬁrst question to ask is, who is the audience for Luv’s music video? The fact that both the lyrics and the messages on the banners are in English gives us a hint that the message targets a global audience. An audience of potential sympathizers to the Kurdish independence project that Helly Luv advocates for. ‘Revolution’ remains relevant to examine precisely because it is using a widespread narrative among sympathizers that to a signiﬁcant extent, romanticizes the Kurdish struggle as heroic.   This romanticization has speciﬁcally put the Kurdish female ﬁghter ﬁgure in the spotlight. Fashion magazines like Elle writing about Kurdish female ﬁghters or H&M selling a jumpsuit that reminds of traditional peshmerga clothes are only symptoms of this fetishization. "Revolution” clearly emphasizes this image of the brave Kurdish female ﬁghter, fearless and deﬁant, “kicking ISIS’s ass” as Vice stated.

While initially seeming empowering, this simplistic portrayal obscures the fact that both Kurdish men and women ﬁghters exist in a conﬂict situation. Portraying the bearing of arms as something empowering by itself silences the human costs of violence. Moreover, as explained on an article in Al-Jazeera, this captivation for Kurdish female ﬁghters ignores the “social revolution that preceded armed struggle” or "the fact that Kurdish women have been engaging in armed resistance for decades without anyone’s notice”. The Kurdish feminist movement does not comprise ﬁghting Daesh alone, there is a whole political ideology behind, inﬂuenced by the ideas of Abdullah Öcalan (currently serving prison in Turkey), which includes, for instance, the science of women, known as Jineology, as an important part of the revolution.

The use of the described female ﬁghter romanticization for nationalist aspirations is further problematic because it is framed within the global War on Terror. The reason behind is that the ﬁght against Daesh is the perfect tool to win the audience’s sympathy. So in the music video context, the use of the War on Terror discourse feeds the existing romanticization which then translates into support for the Kurdish independence. Examining ‘Revolution’’s contradictory messages of war and peace helps us to see how the direct translation from ﬁghting Daesh to getting sympathy is obtained.

Looking closely at Helly Luv’s outﬁt, we can notice her riﬂe-shaped rings or the two crossed bullet belts adorning her body. She also dances with an AK-47 riﬂe on top of a car and leads a disciplined troop of well-armed soldiers. This gloriﬁcation of the aesthetics of violence collides with the banner’s messages asking to “Stop the war”. So war and peace are put together. There is an underlying idea that enforcing peace through violence is justiﬁed. Violence is acceptable when it is framed in terms of a just war.

This just war is obviously the War on Terror, which is made appealing by establishing a binary between good and bad. The peshmerga represent the good side defending freedom and equality while Daesh is the evil side trying to take all this away. Daesh ﬁghters’ facelessness enables a dehumanization that in the end makes the killing of the enemy acceptable. But is the reality that clear-cut? Not according to Riches, who points out that the victim, observer, and perpetrator categories are ﬂuid and can be embodied by the same person. This means that victims can also become perpetrators when taking up arms even if it is seen as justiﬁed. So the good-bad binary is, in reality, more nuance.

But this is not all the picture yet. Jumping to the global politics level, the sympathy for the Kurdish cause is illustrated through Western military training support for the Peshmerga (NATO and Anti-ISIS Global Coalition); political support as exempliﬁed by this April’s “vow of solidarity with Kurdish authorities in Northern Syria by British ofﬁcials”; or by the fact that the international community condemns foreign ﬁghters joining Daesh but has been more laid back regarding “foreign volunteers” joining the People’s Defense Units in Syria or the Peshmerga in Iraq.

This should not be a surprise since it responds to global powers’ aim to legitimize the War on Terror by instrumentalizing the romanticization of the Kurdish struggle. As such, this support is only superﬁcial (as the lack of international recognition to the Iraqi Kurdistan referendum proved in 2017), and thus not willing to stand for Kurdish aspirations.

After having watched more than twice Helly Luv’s music video, we can now ask ourselves what revolution is Helly Luv talking about?

As we prepare to welcome our first cohort of students onto our new online MSc Humanitarian Action, which starts in October, we are show-casing the work that SOAS students and staff are doing on humanitarianism. This includes academic journal articles, dissertations and doctoral research.


Two of our current MSc VCD students, Tayba Ahmed and Jake Tacchi, have done a great job of pulling together research from across the department and the School and presenting it in blog pieces, podcasts and short video format. They have launched the Humanitarian Hub. There are a few more podcasts in the pipeline, so stay tuned! 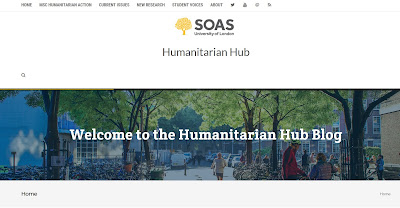 One week left until the Development and Conflict Summer School, and we have a packed programme of lectures, skills sessions (on journalism and documentary film making) and trips - to Amnesty International, the Behavioural Insights Team, and the Imperial War Museum. The participant list is looking really exciting - we are really looking forward to welcoming the Summer School students to SOAS.


Scroll down for blogs on the skills sessions and teaching team.
at July 11, 2019 1 comment:

More exciting news on the Development and Conflict Summer School is that Dr Maya Goodfellow, a colleague on the MSc VCD programme will be lecturing on gender and conflict, and will also be leading a skills session on journalism and conflict. 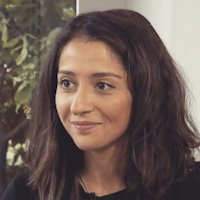 Maya wrote her PhD on "Race and processes of racialisation in British international development discourse (1997-2017)," and is a leading light in the SOAS decolonisation work. She is a regular contributor to The Guardian newspaper and has written for the New York Times, New Statesman, Al Jazeera and the Independent. She has also made several television appearances (BBC, Sky News and Al Jazeera) and is the author of "Hostile Environment. How immigrants became scapegoats" (Verso books).


We will also be joined by Catherine Lee, an international development worker and award-winning filmmaker, who has experience in 18 countries across Africa, Asia, and the Americas. Catherine will be leading a session on documentary filmmaking.
After studying at the Harvard Kennedy School and Yale University, Catherine worked for a decade with the UN, World Bank, Clinton Foundation, and others to understand and affect behavior leading to injustices.  Increasingly convinced that pathos not logos was missing for sustaining change, Catherine began filmmaking.  Her directorial debut premiered at the Tribeca Film Festival and her producorial debut won accolades including the FPA Media Award for Best Arts/Culture Story.  Her work has been featured on/at Channel 4, National Geographic, The Atlantic, Yahoo, the MoMA in New York, UN  in Geneva, and festivals and universities across 3 continents.  Catherine is currently directing-producing East Africa-focused motion picture including a documentary of a child soldier turned PhD student and inter-tribal activist jailed by his president in the world’s “youngest, most broken country.”  Her previous stories include a violinist’s attempt to hold a joint North-South Korean concert straddling their border and refugees as reality TV stars.  While filmmaking, Catherine has continued to consult to international organizations, most recently to UNICEF in East Africa as an M&E specialist advising projects on assessing the results of combatting female genital mutilation, early child marriage, and violence in schools.

Full details of the Summer School are here: https://www.soas.ac.uk/summerschool/subjects/development-and-conflict/