Voices - photo exhibition - and a blog by Megan Howell VCD

Megan Howell is currently exhibiting her photographic work 'Voices' in MADE Cardiff. The photos document some of the forms of violence Megan witnessed in the Jungle camp in Calais. Below is a blog she has written about her journey since completing the VCD course last year.


When I started VCD in September 2014, it was supposed to be the beginning of a well thought out plan which would see me following the course with a masters in Play Therapy which I would use to work with children in refugee camps.  VCD had other ideas.

By the time I graduated in September 2015, VCD had begun to put its plan into action and I had deferred my place on the Play Therapy Masters.  By Christmas I was still struggling to find a job, or even an unpaid internship, working with refugees and asylum seekers in the UK and I was despondent and frustrated.  Then I came across a Guardian article about the camp in Calais that somebody in my house had cut out and kept.  I read it a few times, did some research, contacted some organisations and decided to go and volunteer with Care4Calais for a month in January.

A month counts as long term in Calais, where many volunteers bring donations at the weekend and stay for 48 hours to help out, so within days I was made a team leader.  I had responsibility for planning and implementing van led distributions in the camp and for overseeing the arrival and sorting of donations in the warehouse.

I frequently heard stories about violent incidents between the French riot police (the CRS) and the camp residents involving tear gas but saw nothing so I decided to spend more time in camp outside my working hours.  Then I saw incident after incident.  Capturing what I saw on camera and documenting it on my blog became a priority – an obsession even – as it became clear that what I was witnessing was the state-sanctioned, systematic and violent oppression of stateless people searching for refuge in Europe.

In late February, the rumoured eviction and demolition of the southern half of the camp began under the protection of hugely inflated numbers of CRS acting with near complete impunity.  It was violent and traumatic and thousands were displaced and left destitute within the camp.

At this time, I met Dr. Rhetta Moran of RAPAR who was looking for volunteers to send the organisation daily reports to be used in their press releases covering the evictions.  I had been documenting the evictions photographically since the beginning and offered my services.  RAPAR used my photography and updates on their live feed and just like that I was a documentary photographer.  VCD’s plan was gathering momentum.

Once back in the UK, I began volunteering with the Welsh Refugee Council in Cardiff, where a series of chance meetings and conversations led to them funding me to put on a photography exhibition and awareness raising event about Calais as part of Refugee Week 2016, at which our very own Dr Zoe Marriage came to speak.  I was also given the opportunity to speak about Calais and the exhibition on the BBC Radio Wales ‘Good Morning Show’.

At around the same time, I received an email from Amnesty inviting me to apply to train as a human rights speaker in schools and am now in dialogue with them about using my experience in Calais to promote discourse about refugees and asylum seekers.

I have withdrawn from the Play Therapy masters and am letting VCD make the decisions as its plan seems to be for me to become an artist, activist, educator and campaigner so I’m going to enjoy the ride!  I just hope that, one day, being paid is part of the plan!

Voices - a photographic exploration of the state, power, violence and refugeehood in Calais

A couple of weeks ago, Megan Howell, who studied VCD with us last year, got in contact to say that she was putting on a photograph exhibition in Cardiff, displaying some photos the Jungle camp in Calais where she has been working. 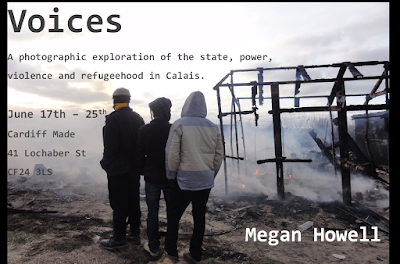 She invited me to the opening on Sunday so we could have a public discussion as part of Refugee Week. Megan identified some moments from her time in Calais that she found particularly significant in defining the aggression that refugees there are facing, I gave some theoretical perspectives, and Baraa Alhalabieh, whom Megan met in Calais and who now lives in London, gave an account of his journey from Syria.

The event was hosted in a café, Cardiff Made (41 Lochaber St), and Megan's work will be on display there for the next week or so. If you feel like a nice cup of tea and a cake, the photos are really worth seeing and prompted a rich discussion the violence of global, European and national politics.

The event was supported by the Welsh Refugee Council. 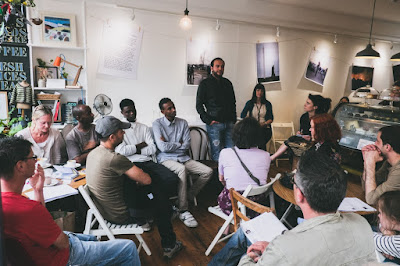 Last week I was at Chatham House on the panel for a book launch. The book, Aid and Authoritarianism in Africa: Development without Democracy, is edited by Tobias Hagmann and Filip Reyntjens, and my chapter was on the budget support given to Rwanda.
I characterised the donor-recipient relations as an unstoppable rock meeting an immovable post - borrowing from a philosophical logic problem. In the political realm, the challenge is to understand how aid - which is conditioned by a dominant set of northern ideologies and interests - interacts with a government that is does not comply with aid's strictures (for example of liberal peaceful democracy) but nevertheless records development successes.
My chapter traces the disjointed and halting discussion as aid donors attempted to discipline the Rwanda government with regard to its governance of domestic political space and its support to militia forces in the Democratic Republic of Congo. The apparent illogic of the unstoppable rock and the immovable post is maintained by a buffer zone of discussion on three points: whether the Rwandan government is authoritarian and violent; whether it is justified; and whether the donors are in any position to judge.

Lectures over, exams done, the sun has come out! Time for a special out-of-hectic-season seminar. I'm really happy to be hosting Giovanni Carbone, a long-time friend and colleague - we wrote our PhD theses together at LSE.

ABSTRACT - African politics long revolved around “personal rulers” who either overstayed in office or were quickly ousted by coups. The multiparty reforms of the 1990s were meant to change and regularize the way in which African rulers access and are removed from office. There is, however, a dearth of systematic data through which the evolution and implications of leadership transitions can be examined. We thus built a comprehensive Africa Leadership Change (ALC) dataset covering all 54 countries in the continent from 1960 to 2015. The dataset provides information for all leaders who held power in the region, including the modes of access to the leadership as well as several other key election and regime variables. An exploratory analysis illustrates how Africa’s reforms affected the dynamics and timing of leaders’ replacement, as well as their socio-economic implications. A comparison with existing datasets shows that ALC is more adequate for investigating leadership transitions in Africa. 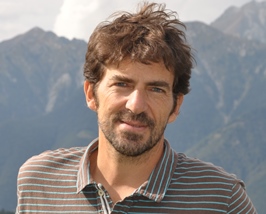